What to do about Mr. Potato 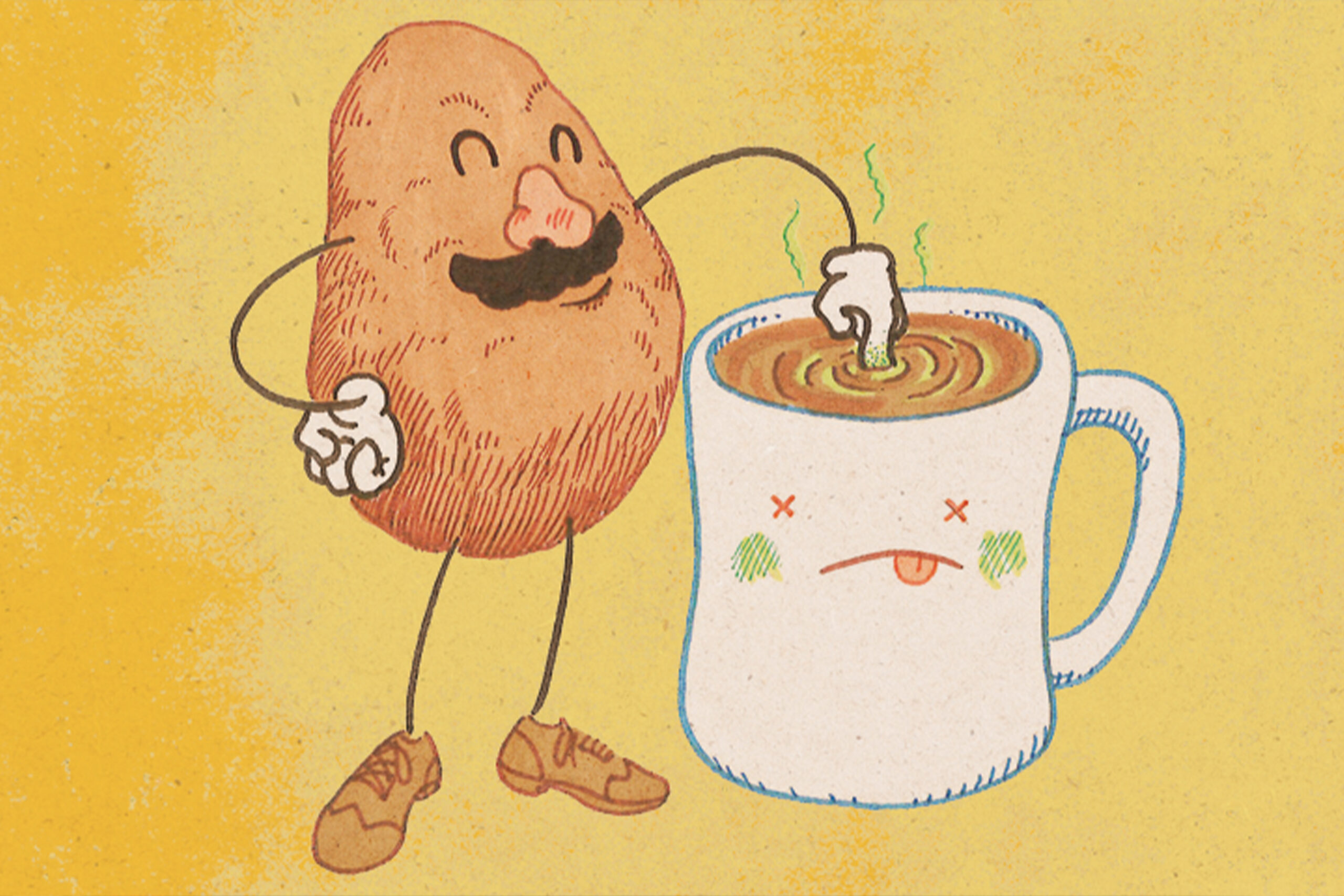 Mr. Potato is an infrequent, unwanted but ultimately harmless visitor from Central Africa.  Many of our Coffeebar guests have heard the legend of Mr. Potato, but precious few have ever actually met him, since we have developed and applied a special protocol that has effectively turned him into a ghost.  This primer will acquaint you with Mr. Potato and give you guidance on how to keep him at bay.

Some coffee drinkers who are familiar with the extraordinary coffees from the Great Lakes region of Central Africa have had, at some point in time, an unfortunate encounter with the aptly named “potato” defect. It is very easy to recognize — it has a character that is almost identical to the taste and aroma of a raw spud, and is usually not very subtle.

Huge progress has been made by producers over the last five years to reduce the frequency of this odd little defect, but it has not yet been completely erased. Even the most carefully cultivated and meticulously processed coffees from this region have a potato bean lurking somewhere, and at some point it will make an uninvited cameo appearance in your cup.   But do not despair! It doesn’t happen very often these days, and we have learned to live with rare intrusion of Mr. Potato because we know that the alternative is much worse — denying ourselves of the distinct pleasure of tasting the delightful and uniquely beautiful coffees from Rwanda and Burundi would be a far greater sacrifice.

If Mr. Potato does appear, we usually smell him coming and show him the door before he ever gets into our cup. The distinct odor of a freshly peeled potato wafts up when we grind the coffee, and that’s our cue to dump the grounds and make a new batch.    That’s how we get along — by being present and attentive we can sidestep most encounters with this funny fellow, and by practicing a little tolerance we find that if or when he does cross our path it isn’t a big deal. We smile, make a new cup and are quickly rewarded with a delicious reminder why we have so much love for these coffees in the first place!

Where does he come from?

The defect, called “potato” by locals and PTD (potato taste defect) by researchers, is caused by airborne bacteria that enter the coffee cherry whenever there is a puncture or tear in the outer skin. The most common cause of the puncture is a small sucking insect called Antestiopsis orbitalis (a.k.a. Antestia) that creates holes in the outer cherry skin and creates the pathway by which the bacteria can enter. Cherry skins can also rupture due to excessive rains that cause rapid ripening, and boring insects like the Hypotenemus hampei, or coffee borer beetle, can drill tiny holes into the coffee cherry’s navel.

The compound responsible for the taste is a pyrazine (isopropyl-2-methoxy-3), of which various types are found in some vegetables like fresh bell peppers, peas, and beetroots. The herbaceous and peppery tastes in white wines made from Sauvignon Blanc grapes are also attributed to pyrazines.

The coffee growing communities in these countries are actively working towards reducing the occurrence of potato. There has been a lot of research in recent years by the Borlaug Institute and CIRAD to try to solve the issue, as well as projects led by TechnoServe.

Currently, the best way to control potato is to enact a three-pronged approach consisting of the following preventative measures:

Another method to reduce the incidence involves using blacklights in traditional color-sorting machines to identify and remove suspect beans during dry milling. This approach seems to make a difference, and several of the producers we work with have already begun using this technology.

You may be wondering, “Why buy this coffee at all, when I can simply buy coffees from other countries where Mr. Potato is not lurking?”

The answer is simple: Because coffees from Rwanda and Burundi are amazing! They are among the most carefully produced in all of Africa and offer flavor profiles that are unique in the world of coffee.  It would be sad to allow the possibility of an occasional bad cup to stand in the way of enjoying these profoundly delicious coffees.

You might compare it to buying a bottle of wine. Statistically speaking, 1% to 5% of all bottles is likely to be “corked.” While it is no fun to get home with a bottle and find it ruined, the likelihood of a reward in he form of amazing taste is high enough and the probability of lousy taste is low enough, that one can easily justify the risk. And when we get that one bottle in a hundred that is a stinker, the solution is easy enough: just throw that bottle away!  If Mr. Potato does show up, it is easy enough to toss aside a cup and brew a new one that we don’t really mind the occasional hassle. Just like most things in life, you spin the wheel enough times and you will eventually hit a whammy. Sometimes one must accept that things aren’t always going to be perfect, and spend time enjoying the 95% of goodness while ignoring the 5% that is not good.

Beyond this basic pragmatism, our position on potato is an issue of principle. Intelligentsia has a very deep and long-standing commitment to the coffee growers of Rwanda and Burundi. They are among the most underprivileged farmers we know, growing coffee in two of the poorest countries in Africa. They’ve worked extremely hard over the past decade to elevate quality and are now producing some of the most delicious coffee in the world! They achieved enough success to become the first African countries to host a Cup of Excellence event, and are making coffees that stand out even among our best offerings for their tremendous sweetness and flavor complexity. These farmers deserve our support, and the taste profiles of the coffees they are producing merit the attention of every serious coffee connoisseur.

A zero-tolerance policy on potato seems to us to be an unreasonable standard for our partners in Central Africa. We are comfortable rejecting lots for defects due to fermentation or processing that affect entire batches of coffee, lots that weigh thousands of pounds each. But Mr. Potato affects individual coffee cherries. He taints just two seeds at a time. In our most recent arrival of Rwandan coffee, each pound of coffee had almost 3,000 seeds. That’s more than 385,000 per bag. More than 100 million in each container. Each year, we buy hundreds of million of seeds from growers in Rwanda and Burundi. Requiring them to ferret out every last potato-tinged seed seems like crazymaking. But that doesn’t mean we are giving up.

We are pledged to continue working together with Rwandan and Burundian farmers, along with the researchers, agronomists and millers who are actively working on ways to evict Mr. Potato. They’ve already succeeded in transforming an industry that was completely unsustainable and provided little or no chance of economic progress to one with some thrilling successes and a bright future. The emergence of these still-very-young specialty sectors has had an enormous positive impact on hundreds of thousands of farmers and their families. Without our support, the progress they’ve made over the last decade could be jeopardized. If if they are abandoned by the specialty coffee industry because we are not able to tolerate an occasional inconvenience, there is a major risk they could find themselves right back where they started.. That just seems wrong to us. We are not willing to step aside and see hopes crushed among the farmers in these countries, nor are we willing to forego the pleasure we take in savoring the outrageously delicious coffees they can produce.

So take that, Mr. Potato! You are not greater than the power of our collective will. We will find a way to shrink you, and eventually to eliminate you. Meanwhile, we will simply shrug you off, and toss you aside when you appear in our cup, and proceed with enjoying the extraordinarily beautiful coffees that our friends in Rwanda and Burundi have put so much care into producing.

Author: Geoff Watts
Filed Under: Direct Trade, In Season, Retail, Sourcing
Why Direct Trade
Why Intelligentsia
Searching is in progress