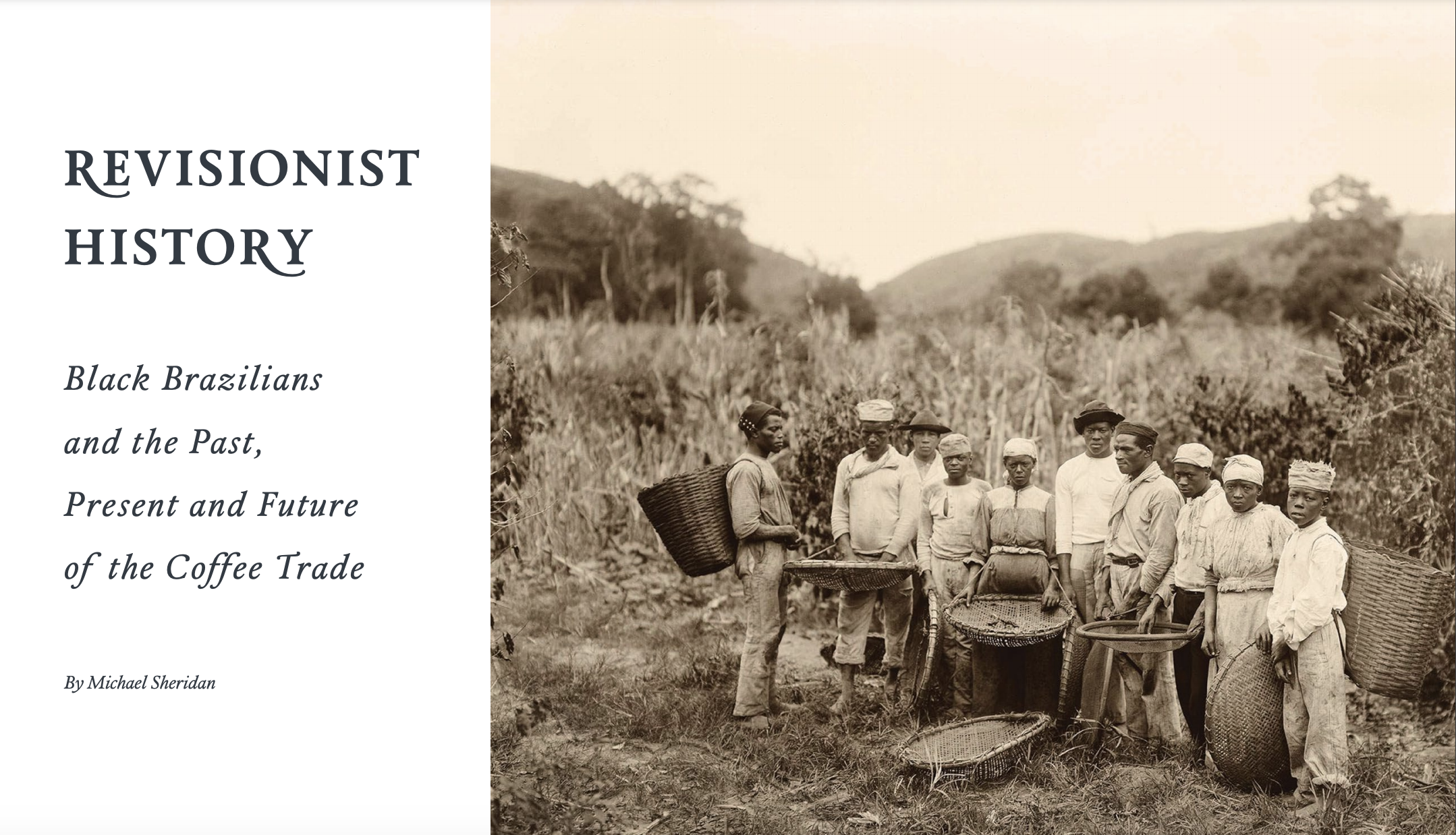 Titled “Revisionist History: Black Brazilians and the Past, Present and Future of the Coffee Trade“, this piece explores the intricate and groundbreaking work of Phyllis Johnson and her organization Coffee Coalition for Racial Equity, while bringing to the forefront coffee’s historic past in Brazil and other regions of the African diaspora.

We asked Michael a few follow-up questions on this crucial topic. Check out the full interview below.

What inspired you to write about this topic?

In one sense, this article was a natural extension of the work I have been doing on issues of fairness in coffee for almost 20 years. But in another important sense, it was very explicitly inspired by the events of 2020.

Back in 2013, while I was living in South America and working on coffee for a humanitarian agency, I learned that a small number of coffee farms in Brazil had been found by the country’s labor ministry to be employing workers in what Brazil’s laws call “conditions analogous to slavery.“ I put together a small project with journalists and researchers in Brazil to better understand what that meant and how it might fit into a new workstream I had started on labor issues in coffee.  In connection with that project, I did a lot of historical research and came to appreciate how central 19th plantation slavery was, not just for the emergence of Brazil’s coffee sector, but in the creation of the modern coffee market itself.

The passing references I had heard or read to coffee’s “dark history” and its colonial past seemed to minimize the relevance of those episodes, or to make them seem like outliers.  But my research made clear to me that slavery wasn’t just something that happened in coffee, it was the thing that happened in coffee. The global coffee market simply would not have emerged when it did without the enslavement of countless thousands of human beings.

That was a revelation to me.  I remember thinking that it shouldn’t have taken so much individual initiative and effort for me to fully understand the role slavery played in coffee’s history.  I wondered why it wasn’t more commonly understood by everyone who works in the industry.  That feeling came back in a big way last year.

Amid the massive mobilization of the movement for Black lives, many progressive coffee companies made public commitments to anti-racism, including Intelligentsia. The starting point for that work was an interrogation of our history — grounding our actions in a shared understanding of how we got to this moment.  It hasn’t been easy.  It has often been uncomfortable. And occasionally it has been painful. But because of all that, the progress we’ve made has been incredibly rewarding. And yet, it still felt to me like something was missing.

I couldn’t help but feel that there was something incongruous about a coffee industry committed to anti-racism in our companies in our communities that didn’t also address it in our supply chains.  And I didn’t understand how we could get to equity and anti-racism if we limited historical inquiry to our country and our communities  and did not apply a similar lens to the coffee trade itself.  I wrote the article because I felt like I could help fill some gaps in the conversation we are having about race in coffee by helping people get a fuller understanding of where the coffee industry came from.

What did you hope would come from writing this article?

I hoped that the article would do for readers what my own research on this issue over the years has done for me — to help them understand the origins of our industry, and locate the current moment in coffee in the broader context of that history.  I guess I hoped it would help broaden and deepen the conversation happening around issues of race in coffee — broaden it beyond the United States to include the supply chains that link us to coffee’s origins, and deepen it to include not only the current state of affairs but also some reckoning with our past.  I want people to acknowledge that thousands of people were enslaved and gave their lives to help build our industry, only to be written out of its history.  I don’t know where a conversation about these facts might lead us in terms of next steps, but I am pretty convinced that we need to have the conversation if we are going to make any progress toward true justice.  I see the Coffee Coalition for Racial Equity doing this work, but not many others, and I felt this article could make a contribution to the conversation.

It was not coincidental that a project developed by the CCRE’s founder, Phyllis Johnson, created a perfect opportunity for me to explore these issues in print.  When Phyllis launched CCRE she said, “We can’t move forward until we look back,” and her efforts to raise the visibility of Black coffee growers in Brazil is a perfect embodiment of this idea.  The project was focused on creating new opportunities for Black growers today precisely because Black growers have been systematically excluded and marginalized — the project’s forward progress was informed by its historical perspective.  I think that juxtaposition of contemporary and historical perspectives was helpful for me in writing the article — I believe I was only able to incorporate more of the dense academic content in the historical section of the article because it was essential backstory to the article’s lighter, more journalistic account of the project.

And of course, I loved the idea that the article might shine more light on Phyllis and the project.  The Peixotos and the Romãos and Miriam Aguiar at Fazenda Cachoeira did the work on the ground and deserve all the credit they get for the success of the project.  But I was especially inspired to write this article by Phyllis in her role as the project catalyst.  We started discussing the project when it was still in its concept phase, and I remember thinking that it was wholly original and audacious.  But mostly I remember thinking how courageous she was to pursue it. Phyllis took risks with the project and met with resistance.  Nevertheless, she persisted.  Because she did, Black growers and their families have opportunities today they didn’t before, and more people are aware of the contributions made by enslaved Africans and Black Brazilians to the creation of a global coffee market.

How do you think readers can start to unpack their potential discomfort with this piece?

That’s a tough question, and one I think readers will need to answer for themselves.

I will say that while I was researching and writing the piece, I did anticipate that some readers would resist what it had to say. But I did not spend too much time trying to make my messages more palatable for those readers because I believe the discomfort is an important part of the process.  I did work hard to identify the most unimpeachable sources in my research, though.  I tried to rely on articles that were so authoritative, books that were so beyond reproach, and databases that were so definitive that they would resist skepticism and blunt criticism by the sheer force of their credibility.   I didn’t want to make it easy for people to reject an uncomfortable message because the sources were controversial or the research was shoddy or the argument was unsound.

How can we be more conscious coffee consumers, and why should we care to? Is it possible?

This is another tough question because I think issue-based consumer engagement is very hard to do well under any circumstances, and especially complicated on the kinds of issues raised in the article.

This is partly because there just aren’t a lot of easy options in the marketplace today for consumers who are interested in racial justice as compared to issues like environmental conservation, for example.  But even if there were, the kind of engagement I think we need around the topics raised in the article and by the work of CCRE is not necessarily consistent with the way issue-based consumer engagement in the coffee sector has worked in the past.

Certifications have invested heavily in branding and streamlined communications.  The approach has been effective and made them the go-to option for consumers looking to shop their values, but in my experience communicating around issues  of justice  in the coffee supply chain for more than a  decade, it has also conditioned consumers to a binary approach: they look for labels and have little appetite for nuanced communications.

I don’t see that kind of reductionist approach working well in this context, which doesn’t just require consumers to sit still long enough to absorb more complex messaging, but also likely discomfits them in the process.

That doesn’t mean that there can’t or won’t be effective consumer engagement campaigns around sourcing coffee from Black growers overseas, or supporting Black-owned coffee businesses here in the United States.  In fact, I think some of the more prominent first-movers in this space have done an exceptionally good job of nesting appeals for support of Black-owned businesses in a critical analysis of race in coffee.

The BD Imports 132 Collection is an uncommonly good example of what this engagement could look like since it embeds a high-impact initiative in the present within an explicit effort to redress historical wrongs.

C*ffeeblack uses its coffee business to advance an ambitious agenda that covers a broad sweep of Black history and culture: its 1616 Project explores coffee’s expatriation from Africa, its far-ranging podcasts move easily from critiques of wealth distribution in the coffee sector to Afro-futurist musings about coffee innovation, and its founder Barthomew Jones drops coffee-focused bars into his Memphis-inflected music to hypnotic effect.

And I have been haunted by the MARTA train parable told by Portrait Coffee in Atlanta’s West End. As the train makes its way out of the city, the neighborhoods it traverses get wealthier and the complexion of the riders changes, with Black and Brown people getting off and white people getting on, in much the same way that the Black and Brown people who grow our coffee step out of the coffee supply chain before it reaches the links at the end of the chain where the biggest rewards are to be found.

These are just three examples I know of, but if they represent the future of consumer engagement around issues of racial justice in coffee, then perhaps there is good reason for optimism!