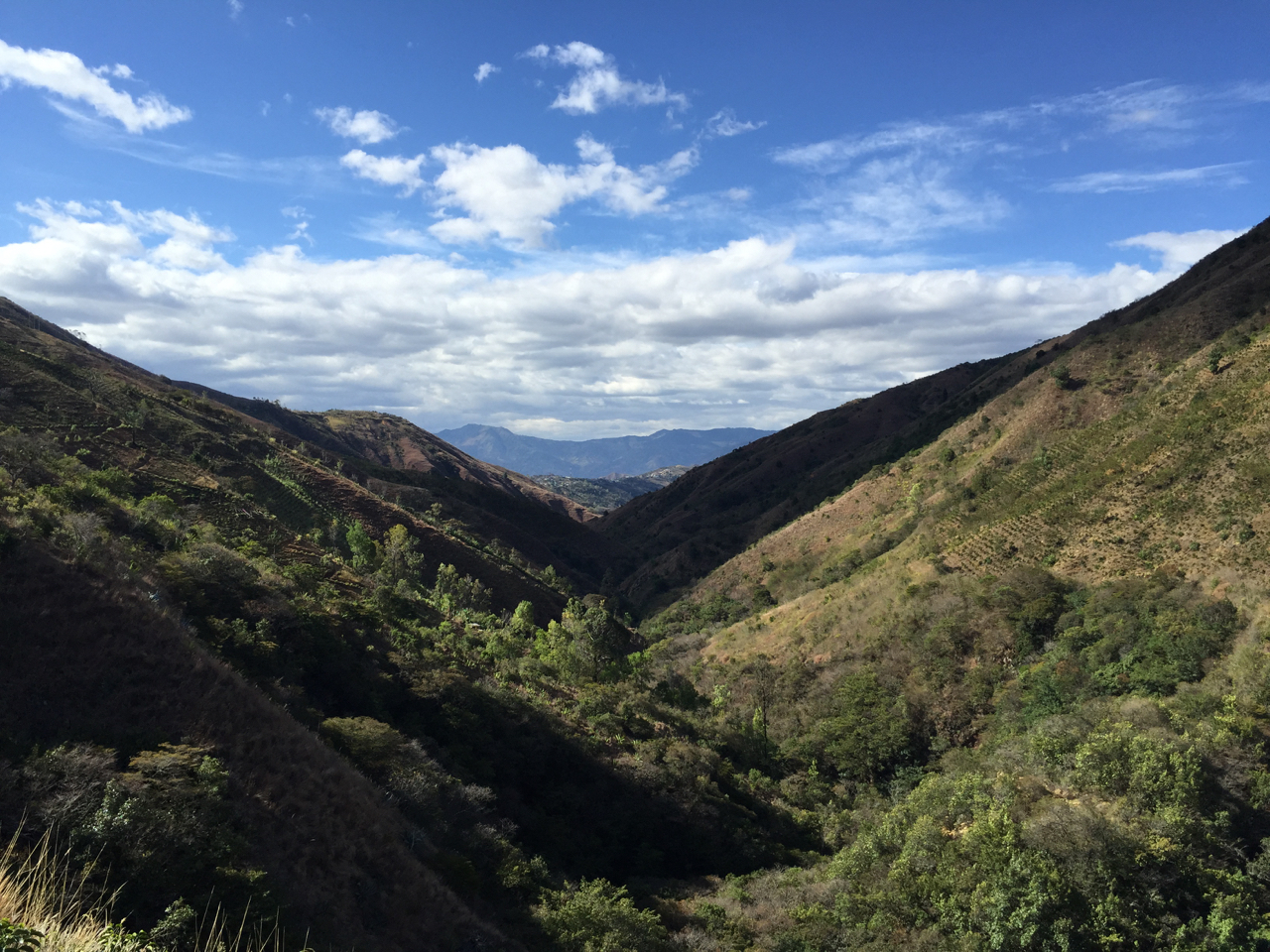 From our Vice President of Coffee and Green Coffee Buyer for Colombia Geoff Watts:

A short drive up the winding road outside the small mountain town of Buesaco in Nariño lies is a small family farm called La Mina.  At first glance, it looks much like all the other farms in the area.  But La Mina and its owner, Franco Héctor López, are in a league all their own.

This lot represents the fifth time La Mina has finished in the top 20 in Colombia’s prestigious Cup of Excellence competition, making it the most decorated farm in the entire region.

Don Franco grew up around coffee.  His mother and grandparents were coffee growers.  They taught him to love the culture of coffee, and he learned the lesson well.  He purchased his own farm more than 30 years ago and has been pouring himself into ever since.

Today, he has nearly 20 hectares (roughly 54 acres) of land, seven of them planted with coffee, the rest a densely wooded conservation area.  At 71 years of age, he continues to be a leader in his community and a model for other farmers who look to follow in his footsteps.

Do you want to know a secret?

When you’ve had as much success growing coffee as Don Franco, no one would blame you for wanting to take it easy for a while.  He’s got a great market for his coffees, a wall full of awards and the respect and admiration of his peers.  What more does one need?  Fortunately for all of us thrill-seekers who find the beauty in coffee taste to be a source of overwhelming joy, Don Franco is not slowing down.  He’s having fun, and he is wired for work: I’m not sure he could stop even if he wanted to.

And therein lies the real secret behind the consistently show-stopping quality of La Mina’s coffee.  Sure, it helps to be located in Buesaco, Nariño, a municipality that seems to have a special sauce for its quality recipe and has become a hotbed for high-end coffee buyers in search of treasure.  But it takes more than a favorable growing environment to produce coffees that demonstrate the real potential of the species.  Bringing out the best in a coffee requires deliberate effort, a willingness to go to great lengths achieve optimal flavor and persistence.   And Don Franco is nothing if not inexhaustible.  Every year I’ve visited La Mina, I have seen new investments in the farm and its processing set-up.  A few years ago, Don Franco built a drying system that was the envy of his neighbors, complete with automated fans and thermostats.  This year, he’s constructed a new lab on-site for quality control.

With a little help from my friends

Don Franco may be the heart and soul of La Mina, but his is not a solo act.  He gets by with a little help from his friends and family.  His daughter Cielo runs the commercial side of the family business, and his son-in-law Nilson helps out with operations.  (Nilson is a formidable farmer in his own right: his farm El Bado, just up the mountain from La Mina, took top honors in Colombia’s 2014 Cup of Excellence.) Adriana Villanueva, from the quality-focused exporter Inconexus, is also a good friend who has been providing support for years.   This kind of collaborative effort is part of the reason that La Mina has been able to hit home runs year after year.

Getting so much better all the time

We have purchased coffee from the López family for six straight seasons.  Some old-timers may remember the debut of La Mina on our menu back in 2012, when it was included in a spectacular release we referred to as “Amigos de Buesaco.”  In early 2018, we will launch a single-farm Limited Release from La Mina.

In the meantime, we are delighted to offer this superlative lot, which placed eighth in this year’s Colombia Cup of Excellence competition.  It is La Mina’s fifth winning CoE lot, bursting with flavors of pear, apricot and mission fig.

Pre-order this truly special coffee here.  Orders received before 3 pm on Thursday, 12/14 will be roasted and shipped on Friday,  12/15 and arrive in time for Christmas.

Learn about Intelligentsia’s involvement with the Cup of Excellence competition here.

Find more information on the Cup of Excellence here.