Cafe X: This is not a joke 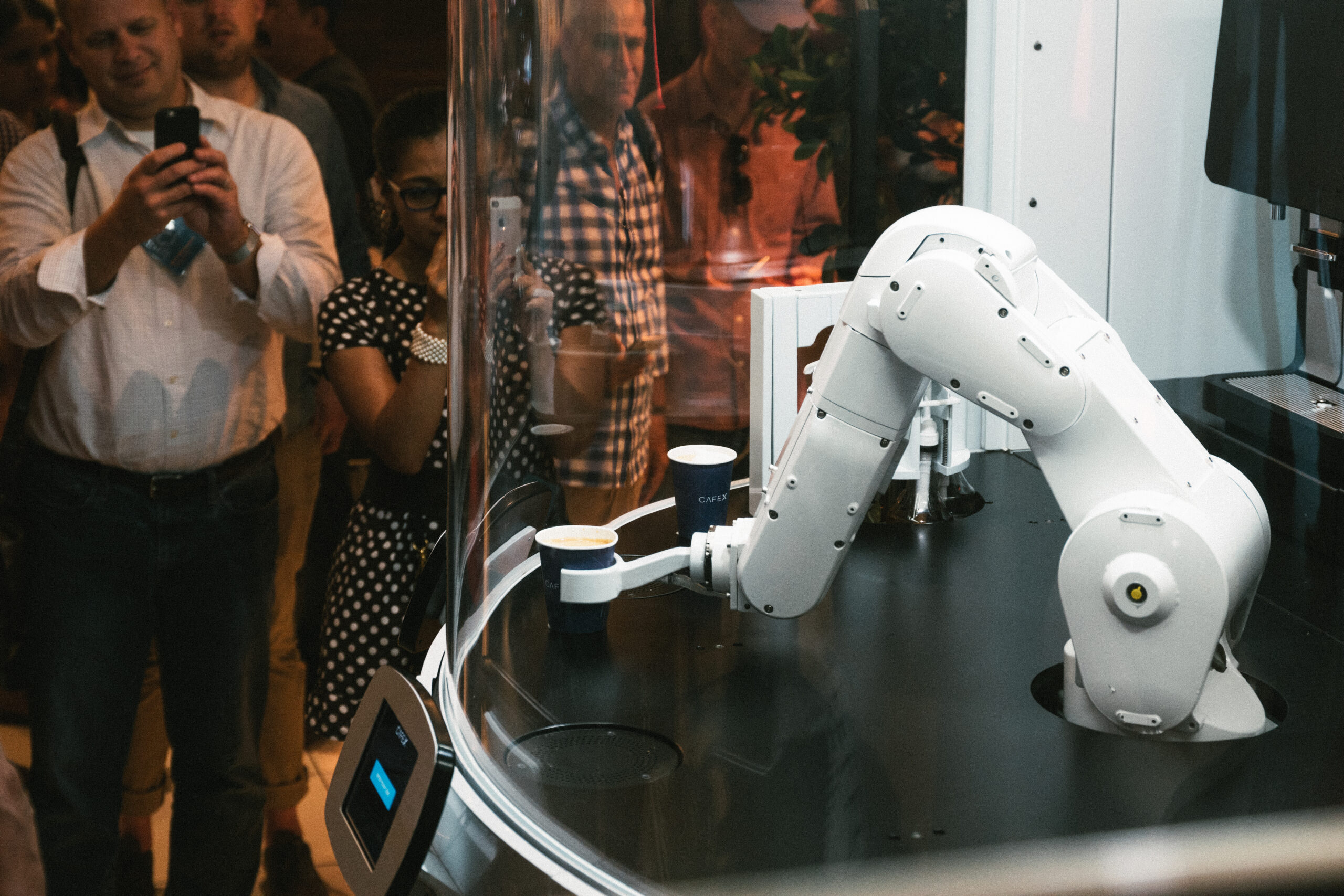 Henry Hu is the Founder and CEO of Cafe X, the robotic café that opened to curious customers in San Francisco in January.  It has earned rave reviews from publications in the tech and finance sectors, and raised concern in coffee circles of a future without baristas.

Today, we publish a conversation with Henry Hu on technology and the future of coffee in the latest episode of the Intelli Sourcing Sessions podcast.

When Hu pitched the idea of a robot barista to celebrity angel investor Jason Calacanis via email, it was a good news-bad news scenario.  The good news?  Calacanis responded immediately.  The bad news?  The response was a one-line email that read, “Is this a joke?”

Hu sent video of a working prototype to assure Calacanis it was not, and soon Hu found himself on stage at the 2016 Launch Festival, a forum for matchmaking between venture capitalists and entrepreneurs founded and hosted by Calacanis, pitching the Cafe X concept before a panel of investors and an audience of thousands.

Cafe X won, and went on to raise more than $5 million in capital to build out the concept.  The San Francisco kiosk is the second, but the first in the United States.  The original is located in Hu’s native Hong Kong, and there are more on the way.  What the format may lack in human warmth it looks to make up in hyper-efficiency: most customers order their coffee on the Cafe X app as they approach the store, and it is ready when they arrive.

“The end of hipster baristas?”

If you have been to the Launch Festival or seen videos on YouTube, you know Calacanis is a hands-on host: he introduces the pitches, facilitates the question-and-answer sessions that follow, and sometimes delivers tips in real-time to the entrepreneurs he brings on stage.  When Hu and his partner finished their pitch for the Cafe X concept, Calacanis proclaimed it “the end of hipster baristas.”

That is a hard pill to swallow for a company like ours, which invests mightily in barista training and has produced more competition champions than any other roaster in the world.

To be sure, when I invited my barista colleagues at Intelligentsia to submit questions for my interview with Henry, they all related in one way or another to the value baristas add to the coffee experience.  In my conversations with Henry, both on the air and off, I don’t think he sees his robotic format and our analog one as incompatible.

The inspiration for Cafe X, as Hu describes in our interview, was the realization he had during a frustrating café experience that the baristas were mostly “moving cups around and pressing buttons,” adding little discernible value to a process that, as far as he could tell, was already almost entirely automated without being particularly efficient.

That is not, of course, the case in coffeebars like ours, where service is efficient, attentive and decidedly analog.  Our baristas perform the full range of back-of-house functions, including blend development, menu-setting, dialing in grind and extraction, and of course, manually brewing coffee to order, while also discreetly curating all aspects of the front-of-house experience.  On both sides of the divide, their expertise and discretion are vital to our ability to consistently deliver an elevated experience for our guests.  But Hu hasn’t positioned Cafe X to compete with this kind of fully realized retail service.  He understands that most people buy their coffee from retail shops where baristas don’t add that kind of value but simply operate automated platforms.  He is betting that the fully automated Cafe X format can deliver more value to those customers by trading human interaction for the promise of a coffee you barely need to break stride to build into your daily routine.

The other thing that distinguishes Cafe X from other automated platforms is its commitment to coffee quality.  Unlike other delivery systems that make a strong convenience play and relegate quality to a lower priority tier, Hu’s says the “Big Idea” of Cafe X is to improve on current standards of productivity in the café without compromising on cup quality.  He has built roasters with a reputation for quality into the four-item espresso-only Cafe X menu.

Next week, when we convene our Direct Trade partners from around the world in San Francisco for our ninth annual Extraordinary Coffee Workshop, Henry and members of his team will be our guests, sharing with our supply chain partners their vision for Cafe X and the future of service in the coffee industry.  Then we will be their guests at the Cafe X kiosk at Metreon in SoMa, where it is Intelligentsia Week: from 25-29 September, every coffee on the menu will be from Intelligentsia.  Our year-round Analog blend anchors the lineup, with a sparkling Tikur Anbessa Organic Ethiopia single-origin offering, a seasonal Sapsucker Blend whose sweetness is worthy of the name and a decaffeinated version of our popular Black Cat in the decaf slot.  If you are in San Francisco next week, stop by and try an Intelligentsia espresso drink from Henry’s Cafe X kiosk.

Listen to my conversation with Cafe X Founder and CEO Henry Hu here.

Subscribe to the Intelli Sourcing Sessions podcast on iTunes or Soundcloud and never miss another Intelligentsia podcast.